A week and a half ago the five day estate auction conducted by Christie's in New York ended of the estate of legendary Asian art dealer "Bobby" Robert Hatfield Ellsworth (1929-2014). The auction was 100% un-reserved and consisted of over 2,000 lots. The sale covered everything from Tang statues to ancient jade to late Qing porcelains. The auction was an enormous success, to put it mildly. The auction grossed over $131,000,000.

About Robert Hatfield Ellsworth aka "Bobby" 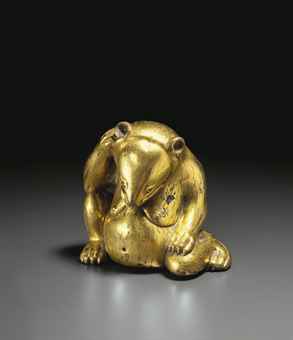 Lot Description A SUPERB GILT-BRONZE FIGURE OF A SEATED BEAR CHINA, WESTERN HAN DYNASTY (206 BC-AD 8) The seated figure shown scratching its right ear, with head lowered and mouth open to show the tongue lolling to one side, the fleshy body finely incised with wavy lines suggesting fur, and with finer, more closely arranged lines defining the brows, ruff and edges of the forelegs and small tail 3 in. (7.6 cm.) high

He began his life in the trade after dropping out of high school and taking a job at a New York antiques gallery, by then he had already been collecting antiques for several years.  During this time he met then dealer Alice Boney after properly identifying a Ming jar he had bought and showed her, she was so impressed she immediately decided to become his mentor . Ms. Boney was at that time perhaps New York's most prominent Asian art dealer. She recognized the then young Mr. Hatfield's great potential. While working for her he quickly developed a keen sense of age, authenticity and for the value of objects in all mediums.

By  1959 he opened his first shop off 58th St. in New York 11 years later he moved his business to a townhouse in the city and then a final move to 960 Fifth Avenue in 1977. He and Alice Boney remained close friends until her death in 1988. During their 40 year friendship, Ellsworth traveled the world with her. From temples throughout Asia to dealers about the globe. From her he learned about cave statues, bronzes and Buddhist art.

During the 1960's he began studying and collecting late 19th and 20th C. Chinese paintings 40 years ahead of the rest of the western world and amassed a huge collection. Later he gave over 450 works to the Metropolitan Museum of Art.  In the donated collection were paintings by Qi baishi, Wang Zen, Zhang Daqian and Wu Changshi. This generous gift later became the inspiration for the Astor Chinese Garden Court at the MET. Along the way he also wrote several books, one of which was Later Chinese Painting and Calligraphy: 1800-1950, published in 1987. Further cementing his position as an important influence and taste maker for later Chinese paintings.

Before long the New York times referred to him as "the king of Ming".

According to legend Mr. Ellsworth kept one of every three things he bought. This strategy allowed him to amass a vast personal collection over time with which he was very generous by making donations to museums and institutions who he felt would most benefit from the gift.

To read a very complete and fascinating biography of his life read: THE SENSUOUS IMMORTAL ROBERT HATFIELD ELLSWORTH (1929-2014