Chinese Porcelain of the Ming Dynasty and it's Influence

The Ming dynasty was an extraordinary period in Chinese history, not only for the political shifts which took place during this era but for the evolution of kiln technology. These changes altered forever the methods of making, decorating and and appreciating ceramics across continents and the world.  The Chinese porcelain of the Ming Dynasty presented a entirely new era of material culture for the country, not only for use within the Imperial Palaces but for use by the broader masses as well. The resulting production also very rapidly created international demand and left a legacy which quite literally started industries far beyond China's own borders.  created vast amounts of wealth through global trade and set the stage for countries around the world to follow suit in porcelain production.

At the onset of the Ming dynasty, thanks to the importation of cobalt blue from Persia initiated a few decades earlier during the Yuan dynasty (1271-1368)  potters in China were well on their way to working with this mineral as a coloring agent. Additionally, the Chinese quickly discovered their own sources for cobalt within China, thus allowing the mixing of them creating a very wide range of coloring possibilities. Not all cobalt is identical and can produce varying tones of blue depending on its purity and other minerals content. While the late Yuan and early Ming dynasties were not the first time cobalt was used on pottery, it was the first time it was learned to be used with consistency. The first known example was produced during the Tang Dynasty.

"Chinese Blue and White, its Infancy and Evolution

The earliest under glaze blue is believed to have begun in a limited way during the Tang Dyansty (618-906 AD), however it really didn't go into common usage until a better source of high quality Cobalt could be found a few hundred years later during the Yuan period when it was imported from Persia. Also, during the Tang period a fine quality highly vitrified porcelain of pure white color had yet to be developed, this happened during the Song Dynasty (960-1279 AD) with the evolution of Qingbai wares." Click HERE to Read More

Coinciding the evolution resulting from cobalt, the use of other coloring agents came into play as over-glaze and additional under-glaze enamels. These included reds, greens, yellows and aubergine. It was also during the Ming dynasty that the first reign marks began being used on porcelain during the late 15th C..

The Video: Chinese Porcelain of the Ming Dynasty

We do hope you enjoy the video. Thank you for visiting BidAmount.com

To learn more about Chinese Porcelain of the Ming Dynasty visit our archives and two Blogs..

Are you getting the FREE Weekly BidAmount NewsLetter-Watchlist for eBay?

Sign up today at the top right of this page. 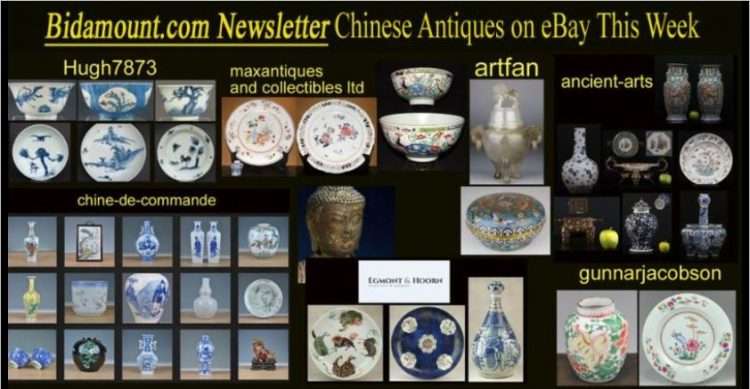 Asian Antiques Newsletter from BidAmount, its free just sign up.