Chinese Bronze Values. Every once in a while a collection of Asian works of art comes onto the market focused primarily in a particular genre which gets much too little attention. A couple weeks ago on March 21, 2015,  Sotheby's in New York conducted just such an auction. Within that sale were dozens of terrific Song to Qing dynasty bronzes from a couple of collections. The auction results demonstrated several things. First, the auction showed quite clearly Song to Qing Chinese bronze values are still at a very affordable level for most collectors.  Consequently, you do not have to be wealthy to collect

excellent early objects. Second, for whatever reason, the sale demonstrated (and frankly a mystery to me) these lovely early objects have yet to gain much traction with the fashion-driven mainland Chinese buyer.

Down through the centuries in China, collecting tastes had been driven by what was of interest to the Emperor. Today the tastes of the Imperial house have been replaced with those of the newly minted million and billionaires within the country.

The Rise of Song Dynasty Ceramics

It wasn't that long ago Mainland Chinese buyer's were not all that interested in Song ceramics. When the word got around the bigger buyers in the market were developing more sophisticated tastes, prices began moving very quickly.  A Song vase just sold for 14.7 Million this week, doubling it's estimate realizing 10 or 15 times more than it would have brought a dozen years ago.

The Sotheby's sale offered some terrific examples primarily showcasing vases and incense burners. Over the last 30 years I've had the pleasure of buying and selling many virtually identical examples to those sold on the 21st in NY. While the prices have of course risen over the years, they haven't done so in equal proportion to other categories.  Fine Qing Jades, porcelains, 19th to 20 C paintings and ancient bronzes have all leaped in value. The Song, Yuan, Ming and Qing Chinese bronze values being as low as they are will no doubt eventually attract more competitive and wealthy buyers, until then they are a relative bargain. They are also terrific objects.

For collectors who find the shapes and styles as well as the evolution of form which took place for bronze vessels during this later period in Chinese history, today's market is indeed a welcoming environment.  It is also an area of which relatively little has been written with the exception of a few books including Rose Kerr's "Later Chinese Bronzes" and a few tombs written about scholar's desk objects, there is not a heck of a lot out there. I do hope a few museums today have jumped ahead of the curve and built or are building some collections of these pieces.

Click to enlarge any image below for a better view and prices realized. Most with the exception of a few Yuan pieces are under 10" tall. 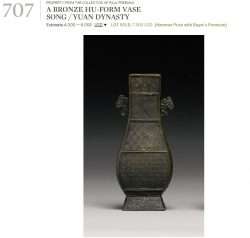 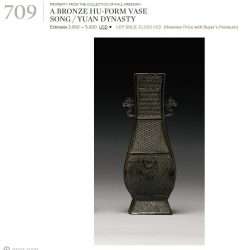 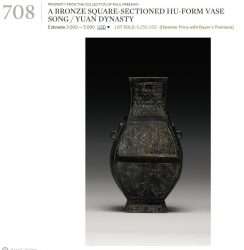 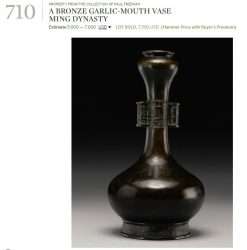 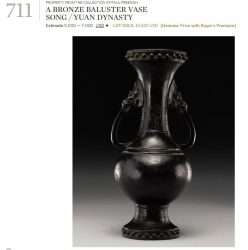 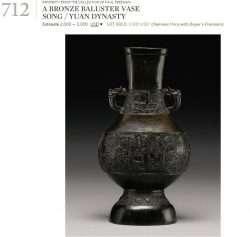 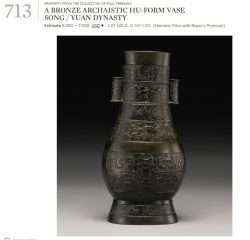 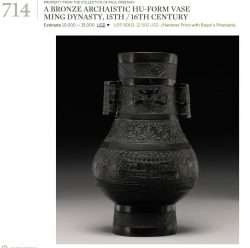 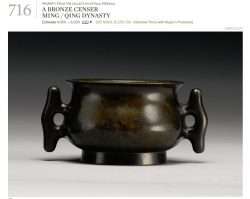 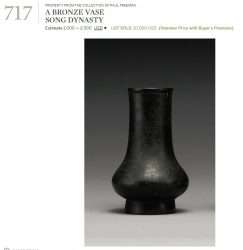 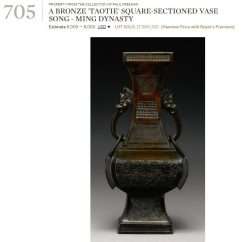 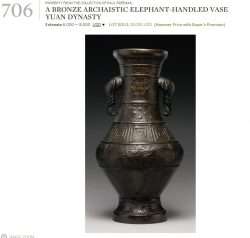