YONGLE SIX-CHARACTER PRESENTATION MARK AND OF THE PERIOD (1402-1424) 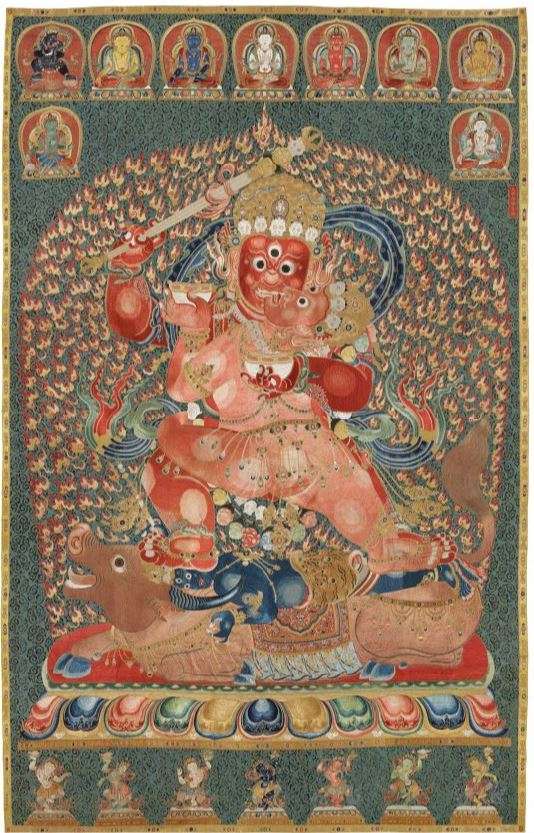 A HIGHLY IMPORTANT IMPERIAL EMBROIDERED SILK THANGKA
YONGLE SIX-CHARACTER PRESENTATION MARK AND OF THE PERIOD (1402-1424)
Chinese Art Auction Market: This massive panel is exquisitely embroidered in gold thread and brilliant coloured silk threads on leaf-green jiang chou silk enriched with a regular pattern of dark blue medallions of curled leafy scrolls outlined with gold thread. The central image is of the wrathful Raktayamari, depicted in tones of red, standing in yab-yum embracing his consort Vajravetali. Her left leg encircling his waist, his right hand wielding above his head a khatvanga embellished with human heads in varying states and the vajra thunderbolt, his left arm supporting his facing consort and holding akapala or skull cap in his left hand. The locked couple is trampling on the

Check it out, Free Subscription

blue corpse of Yama, the Lord of death, wearing a tiger skin and crown, lying on the back of their mount, a brown buffalo recumbent on a multi-coloured lotus base. All below two rows of buddhas and bodhisattvas seated on lotus bases, the upper including Heruka Vajrabhairava on the far left and Manjusri on the far right, flanking the five Dhyani Buddhas, Ratnasambhava, Akshobhya, Vairocana, Amitabha and Amoghasiddhi. The lower row with Green Tara and White Tara. On the lower panel is a row of seven offering goddesses dancing on lotus bases and holding aloft dishes as offerings below the couple. The thangka is bordered by an embroidered yellow-ground band of vajra. On the upper right side is the vertical presentation mark in gold thread on a red embroidered ground below the White Tara. Accompanied with a Qing dynasty silk surround now detached.
132 x 84 in. (335.3 x 213.4 cm.)