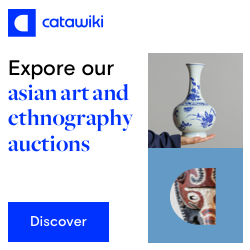 CATAWIKI, a good reliable source for fine Chinese porcelains and decorative art from collections and sellers in Europe the United Kingdom and United States.  Registering is very easy and fast. Unlike eBay, CATAWIKI builds and posts their auctions by age, type and area of interest from multiple sellers. Typically several auctions end each week, with new ones starting each week.  It's a very active site.

Carlo is now thirty years old, but since he was a child he has always been surrounded by Asian Art and Antiques, as well as Italian Design . In fact, his uncle is a true collector and former dealer of Art and Antiques and, when Carlo was a child, he used to take him to all kinds of Antiques shops and fairs. Since then, Asian Art has been an important part of Carlo’s life, becoming a true passion.

Over the years, Carlo has never stopped learning about Asian art: giving advice to potential buyers, and purchasing and creating his own collection. He has his own collection of Chinese Porcelain and Italian Design.

When he was eighteen he joined some online forums and social media groups  about Chinese Porcelain and he knew some very important dealers, experts and collectors that are alright now an essential part of his network.

He also published thanks to Mr. Peter Combs an article about Qianjiang Style on Porcelain on Bidamount.com.

He graduated in Economics and, in order to reach this goal, he started to trade Chinese Antiquities, in particular Chinese Porcelain, to pay for his studies.

Then, he worked for two years as Head Specialist for the Chinese Antiques Department at Czerny’s International Auction House, and for a year as a Consultant before joining Catawiki on October 2018.

‘As a former consultant and current collector, I understand what a collector wants,’ Carlo assures. Buyers and sellers at Catawiki can definitely be sure that they will find fine, beautiful and really interesting Asian antiques in Carlo’s auctions.

Sarah Orford is a woman of action who has built up a solid track record in a very short space of time. At home she was always busy with art, but she also wanted to study French. French won out, which is why she went to live in Paris.

However, Sarah continued to be drawn to art, so she ended up doing a course called 'Manager in the Art Market', which focused on a hands-on approach. Immediately afterwards she began doing internships at auction houses such as Sotheby's and Cabinet Thierry Portier. This inspired her fascination for Asian art, and she worked for several years in a gallery specialising in this field. But Sarah still had not completed her education, so she decided to do a degree in Asian Art and Culture, which took her on a research trip to Taipei.

Now Sarah has finally found her place: at Catawiki! The hugely diverse range of items that she evaluates is enough to satisfy her hunger for learning. She has a particular preference for ceramics, ideally with beautiful decorations or Chinese symbols, which reveal more about the object's origin. Sarah is still in contact with various fellow students working in the art trade, meaning that she can keep up to date with the market and build enthusiasm for Catawiki at the same time.

Cristina fell in love with Asian art when, at the age of nine, she visited Chinatown in San Francisco. Since then, she has always been interested in this area; so much that, as soon as she could, she opened her own store when she was 20 years old, selling art in general and continuing to study.

She started at Catawiki as an expert in Asian art. As soon as she had the opportunity to work at Catawiki, she did not hesitate to send her application. Since then, Cristina is in charge of prestigious and exclusive auctions, with objects meant mainly for collectors of high quality objects.

Cristina loves working with her team. By combining their different points of view about an object, they continue to learn from each other. According to Cristina, 'the secret of being an expert is to keep studying and to ask yourself the right questions about a lot'. In addition, she is happy to be able to participate in the evolution of the market using the internet.

I am an expert in art from Asia, specialised in art from Japan, India and the Himalayan region.

Growing up in Nepal and being from a family with roots in Indonesia and having parents with a gallery specialised in Asian Art and Antiques, Asia and its arts and cultures have always formed an important part of my life.

After working in the arts and antiques trade for 20 years and being co-owner of a gallery in Amsterdam for almost 10 years, participating in National and International Antique fairs, organizing exhibitions, giving lectures and writing articles for magazines and newspapers it was time for a change. I was a member of the VHOK (Dutch Antique Dealers Association) and CINOA and former active comittee member of the art & antqiue dealers district in Amsterdam. In 2015 I joined Catawiki where I started work on making specialised Asian antiques auctions. I am currently responsible for the Indian Islamic antiques, The Japanese Samurai and the Exclusive Japanese Antiques auctions. My focus is on making high quality auctions. I am someone who likes to keep busy, so Catawiki is the perfect place for me. With hundreds of the most diverse lots every week, I can study, search and acquire knowledge to my heart’s content.

Giovanni Bottero earned a BA (Bachelor of Arts) in ‘Oriental Languages and Civilization’ from Universita’ degli Studi di Roma “La Sapienza” (2003-2007). Together with the study of Japanese (3 years) as well as Korean languages and cultures (2 years), throughout this program, Giovanni developed a passion for Japanese Art History, with a particular predilection for ukiyoe (‘images of the Floating World), a genre or school that focused on idealized portrayals of the entertainments centered on the theater and pleasure quarters of early modern Japan. His studies and appreciation of ukiyoe also lead to an interest and in-depth research of irezumi (traditional Japanese tattoo) as well as misemono (street entertainments and freak shows), two often overlooked elements of the Floating World.

Thanks to his knowledge in the field of ukiyoe, in 2009 Giovanni collaborated with Pandolfini Auction House, one of Italy’s most prestigious Asian Art auction houses, as a consultant on Japanese prints. During his Master of Arts in Japanese Studies at Leiden University in Holldan (2007-2009), Giovanni honed his academic and Japanese language skills in an international environment. As part of his MA, Giovanni completed the course “Advanced Applied Japanese” and lived in Tokyo for one year, where he studied for two semesters at Sophia University. While in Tokyo, Giovanni also attended the “Practicum in Japanese Art History” taught by the late Professor Kobayashi Tadashi, one of the leading scholars of ukiyoe, at Tokyo Imperial University (Gakushuin). Once back in Leiden, Giovanni completed his Master’s thesis under the supervision of Professor Matthi Forrer, one of Europe’s foremost Hokusai scholars. In 2009 Giovanni was accepted into University of Wisconsin – Madison’s Art History Ph.D. program. This gave Giovanni the opportunity to do extensive research on the Van Vleck ukiyoe print collection under the supervision and guidance of the Curator of Prints and Works on Paper at the Chazen Museum of Art. In the Spring of 2011, Giovanni participated in the seminar “Masculinities in Early Modern Japanese Visual Culture,” lead by his advisor Professor Quitman Eugene Phillips. Giovanni’s final paper, entitled “Marketing Masculinities in Early Modern Japanese Visual Culture,” was awarded the Douglas Schewe Outstanding Graduate Paper Award. During his studies at Madison, Giovanni collaborated on several projects for the Chazen Museum of Art. Among these, the cataloging of the netsuke collection (104 objects) and curating a display for an Edo period Japanese suit of armor. This allowed him to expand his interests and knowledge beyond ukiyoe. Moreover, Giovanni has curated a display of Satsuma ceramics from the collection of Ed and Karen Rogan. This experience helped him gain insight into different aspects of curatorial work: working with several members of the museum staff, establishing a rapport with the collectors, smaking a selection of the objects, designing the display and writing a small catalogue.

In Summer 2013 Giovanni was selected as Research Assistant for the Gerhard Pulverer Collection Project at the Freer|Sackler Galleries of the Smithsonian Institution in Washington, DC. Here Giovanni was in charge of researching, studying and transcribing over 1000 ehon (illustrated books) from the prestigious Pulverer Collection. As part of his project, Giovanni created interactive maps that mark relevant sites for the history of early modern publishing in Edo (Tokyo), Kyoto, and Osaka. From October 2016 until February 2017, Govanni worked in the Japanese Art Gallery “Joan B. Mirviss LTD” in New York, initially as an intern and later as Gallery Administrator. Besides expanding his knowledge of woodblock prints and paintings from  the Edo period, here Giovanni has had the opportunity to study and touch modern and contemporary Japanese ceramics while being in charge of the day-to-day gallery business (bookkeeping, invoicing of works of art, organization of exhibitions and events, preparing labels, price lists, researching Japanese and international auctions). Since April 2017 Giovanni has been working in his current role as Japanese Art Expert at Catawiki.

I started my professional life in 1998 by opening my first shop THE JANKRI.in Saint Ouen market

partnership with Eric Chazot  (expert in Himalayan art until 2001

One of the first tribal art gallery in Bangkok.

I make many exhibitions in Bangkok

Inspired by her husband’s collection in European antiques, Ye Hua decided to start her own collection in Chinese porcelain. This was already 12 years ago, and since then, Ye Hua has become a passionate collector of Chinese Antique porcelain. A few years ago, she also started to collect jade and Yi Xing pottery. She believes that the knowledge can be built up by reading Chinese art related articles, going to auction houses and holding objects. To keep up to date about new technology of producing ceramics, she travels once per year to China to meet Chinese collectors and antique dealers.

Her motto: honesty and quality. At Catawiki, Ye Hua can keep developing her skills in Chinese Art field, learning from skilled sellers and doing research, as well as supporting collectors to build up collection. For Ye Hua it is very important to give honest opinions based on her experience, knowledge and the current market and trends. She prefers open dialogue to keep good relation with (potencial) sellers and buyers.